There is little doubt that becoming involved in a dispute can have a massive negative impact on the wellbeing of both businesses and individuals alike. In the Agricultural and Farming sectors, disputes arise in many ways including between suppliers, professionals, employees and partners. Disputes are costly, disruptive and can be highly stressful.

Even these days it is not uncommon to hear individuals aggressively threaten, having watched too many Hollywood movies, “I will see you in court!”. However, the reality of court action is far from attractive. Court proceedings are extremely slow, expensive, highly emotionally charged and the outcome is often uncertain to predict.

Given these considerations over recent years, alternative methods of dispute resolution have developed. These include Arbitration, Expert determination but by far the most popular currently is Mediation. So what is Mediation exactly? It is a voluntary informal flexible process whereby a neutral third party (the mediator), assists to reach a facilitated agreement.

There are many advantages of mediation as compared to traditional formal dispute resolution methods such as Arbitration and Court proceedings.

One of the main advantages of mediation is that it is very flexible in terms of the solutions that can be found. This can be compared to court action where the Judge has limited powers as to what he/she can order when imposing an outcome. Within the mediation process, the parties are able to explore endless creative solutions which in certain cases actually preserve rather than destroy relationships.

For example recent participants to a mediation were able to reach a solution in terms of the route of a right of way, which suited them both from a practical point of view, rather than focusing on their perceived strict legal rights. Similarly parties who were in dispute as to a defective tractor including a claim for repayment of purchase monies, were able to resolve the issues between them by a combination of the supply of a cultivator  together with a small payment. These creative solutions would not have been open to a Judge or an Arbitrator.

Finally, does mediation actually work? The answer is yes, as reported statistics indicate that 85%-90% of disputes are resolved either on the day of the mediation itself or shortly thereafter as a result of discussions that took place during the mediation process.

So if you are involved in a dispute and are tempted to go for that dramatic Hollywood line, you may want to rethink and indicate “I will see you in mediation!”.

As featured in NFU British Farmer and Grower Magazine - September 2017 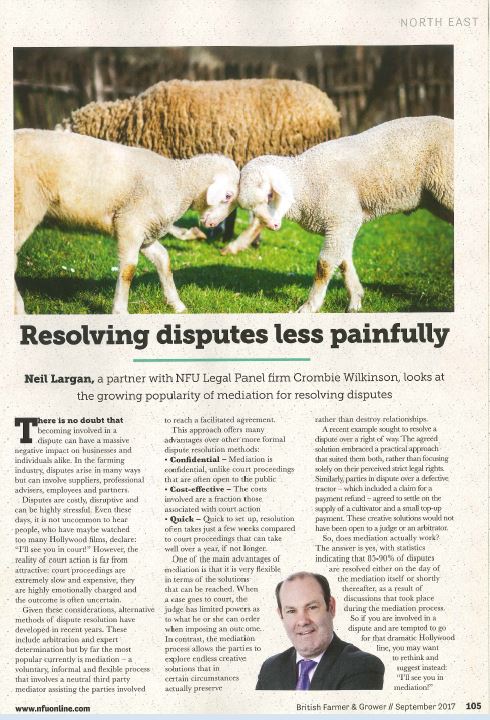 How can we help you?

What our Clients say