Whether you are providing services or products, or purchasing goods and equipment, it is always advisable to put the agreement in writing so that if there are any disputes or disagreements then each party can refer to the ‘contract’ to hopefully resolve any issues.

However, any contract is only as good as its’ drafting, and given the potential cost of rectifying any dispute, it is essential that you understand your rights and obligations under the contract, and that you are happy that it achieves what has been agreed. For NFU members alone (who cover roughly two-thirds of the agricultural land in this country), the cost of rectifying contract disputes in 2015/2016 was just shy of £700,000. Whilst there are always going to be disagreements, a substantial part of this figure could probably be reduced if the parties had taken professional advice before entering into the contracts.

It is therefore strongly recommended to take professional advice on the form and content of any contract that you are thinking of entering into, before it becomes binding. As well as ensuring that your objectives are achieved by the contract, any advice should confirm to you whether or not there may be any onerous clauses in the contract which may simply need clarification or perhaps more seriously, need amendment or renegotiation.

Some of the main areas for consideration in a contract include the length of the contract and whether or not this can be terminated or shortened in any way; what price is to be paid and when and under what conditions; is there an exact definition of what goods/equipment/services are to be provided so that there cannot be any misunderstanding; and correctly defining the parties to the contract.

There is also a tendency to accept those terms and phrases which just appear to be ‘legal jargon’ but if there is any doubt as to what these might mean, then it is much better to receive professional advice on the same, to give piece of mind. After all, if they did not have any effect, then they would not be in the contract.

A straightforward example of a situation that had inadvertently arisen recently, involved a contract that simply referred to the ‘purchase price’ as being the standard price paid by the purchaser of the products, during the duration of the contract. It turned out that the price that was discussed during negotiations for the contract was much higher than the price when the contract had been completed and was actually in force. However, as the contract did not have provisions to say that there was a minimum price, or that the price was that mentioned in negotiations, the supplier had to accept the purchaser’s then standard price which effectively lead to a loss of £20,000 per year on a 5 year contract, against the figures that had been originally discussed during negotiations. There was no recourse under the contract but a simple review and some minor amendments and additional wording agreed and inserted before the contract came into force, could easily have prevented this scenario.

The team at Crombie Wilkinson are one of only two panel solicitors for the NFU in this region, and as part of NFU membership, members are entitled to a contract review from as little as £275 + VAT, subject to the type of contract and what may be involved. We deal with all manner of contract reviews, whether for NFU members, agriculture related matters through to commercial contracts, so if you are about to enter into a contract, please do contact us to carry out a contract review so that you can have the peace of mind that the contract does exactly what you intend it to do.

How can we help you?

We have taken the next step in demonstrating our support for our Armed Forces community by applying for and receiving the Bronze award from the Defence Employer Recognition Scheme (ERS). The ERS recognises commitment and support from UK employers for... 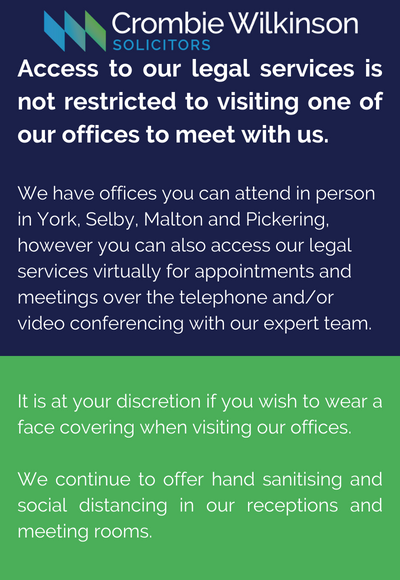 How can family mediation help with decisions about money and property? Whether or not you have ...

Calling all businesses in Ryedale Pop up Business Cafe

An opportunity to get all the answers to business questions in one place is happening in Malton in February 2020. The Local Enterprise Partnership with Ryedale District Council and the local business community will be on hand at the Popup Business...

What our Clients say